Behind the Scenes: USA book 2019 RWC spot with fitting farewell for Todd Clever 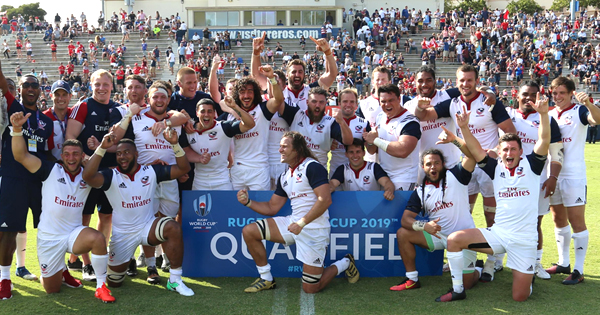 Amidst the Summer Internationals and the Lions Tour, there were a number of 2019 Rugby World Cup qualification matches, one of them deciding who would be heading to Japan in two years’ time as winner of the Americas segment.

The USA and Canada faced each other in a winner-takes-all clash in San Diego after the two sides drew 28-28 in Hamilton in the first of two legs. The Eagles ran out convincing winners, 52-16 in front of 5,000 people at Torero Stadium.

World Rugby have since released a superb behind-the-scenes video of the preparations of the USA team, focusing on their training facilities, the importance of the game and words from head coach John Mitchell and retiring captain Todd Clever.

Clever, the USA’s most capped senior Test player, made his debut in 2003.

“It has been a great 15 years with the National Team. I have had six Eagles coaches and have captained the team under four of them,” said the 34-year-old.

“I’ve left everything on the field and did everything for my teammates, which makes this process a bit easier. But leaving on my own terms, on home soil, in front of friends and family; a lot of players aren’t able to do that either because of injury, selection or whatever the case may be.

“On the playing side of things, all of my goals have been checked off,” said Clever, who has played professional rugby in New Zealand, South Africa, the UK and Japan.

“I’ve played all over the world, represented my country in World Cups, and played with and against some of the best players in the world.”

This video gives a unique insight into life in the Eagles camp, ranging from gym work to the pre-match pep-talk in the dressing room as well as short highlights of the emphatic win.

The margin of victory was perhaps the biggest surprise with the USA running away comfortably in the second half. Their triumph secured them a place in Pool C alongside England, France and Argentina, with one spot still remaining for Oceania 2.