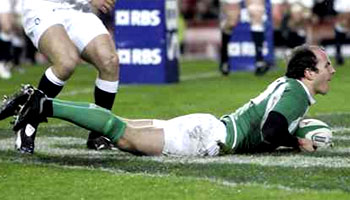 After a heart breaking loss to France the previous week in the closing seconds of the match, Ireland had refocused themselves for their second home game of the Championship at Croke Park.

It was to be a game of huge physical intensity and high scoring. The French had survived, barely, but for the English there would be no escape. With Irish Rugby’s home, Landsdowne Road having been closed for repairs, the union had looked to the Gaelic Athletic Association (G.A.A.) and Croke Park for a temporary venue.

To many fans around the world following the Six Nations, such a situation would seem rather ordinary but to the Irish and the English it was a subject of immense tension and deep passion.

It had been a bloody Sunday in the November of 1920 that 14 Irish civilians were massacred on this ground by British Security forces in pursuit of a suspected IRA sentry that took refuge in the ground.

The football match that was underway was interrupted as confusion broke out amidst the sounds of revolver fire coming from the British Security as they pursued the “IRA sentry” into the ground. Amidst the chaos, 14 civilians were shot dead which subsequently led to the banning of any foreign sports (football and rugby) at Croke Park.

In 2007, the doors to Croke Park were opened, once again to Irish Rugby in their 2007 Six Nations season. Emotions ran high amongst the Irish in the both the changing room and the stands as they prepared to deliver their long awaited vengeance unto England.