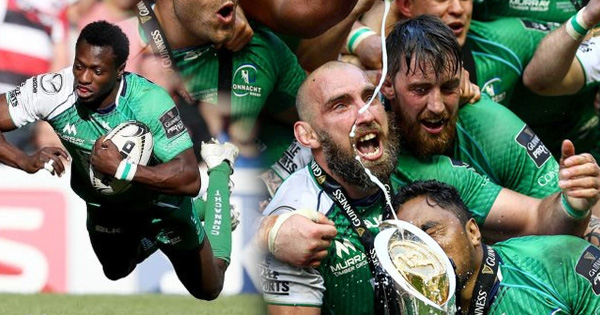 Connacht completely out-played Leinster in the PRO12 final at Murrayfield, securing their first ever major trophy in their history in front of a record 34,550 fans. They scored three tries and ran out 20-10 victors.

The odds were severely stacked against Connacht in real terms. Leinster, having won the title four times already were looking for their third in four years. For Connacht, this was their first major final of any kind in their history. But it didn’t show one bit.

Two tries within the first 25 minutes for Pat Lam’s side blew off any nerves they may have had and at the heart of it was Robbie Henshaw, who had a superb game. His bulldozing runs preceding Tiernan O’Halloran and Niyi Adeolokun’s scores were the mark of an Irish superstar of the future.

Adeolokun’s try was exceptional. The Nigerian-born winger’s chip-and-chase from otherwise scrappy ball to beat Rob Kearney to the line – along with Bundee Aki’s thumping hit on Sexton – was the pick of the first half’s action.

Leinster got themselves into gear early in the second period through a Jonny Sexton penalty, but Connacht were in reality, biding their time before their third try. USA internationalist AJ MacGinty was in fine form and his deft little chip ahead sat up perfectly for Matt Healy.

Leinster got a try back through Sean Cronin and it came as Connacht were temporarily down to 14 men, as O’Halloran left the field injured after a sickening contact with Ben Te’o. Sexton’s conversion good, the score was 20-10.

Leinster tried to muster up one final attack but Connacht held on to become deserving winners of the PRO12 for the first time in their history.

You can view match highlights in the video below: