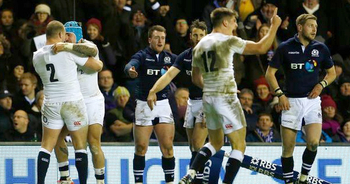 Scotland were unable to continue their Rugby World Cup form as they were beaten 15-9 by England at Murrayfield. It was England’s seventh win in a row against Scotland. An early try by George Kruis, and a second half score by Jack Nowell put the game out of reach.

In a largely stoic affair, England were easily the more dominant side throughout the match, out-scoring the home side by two tries to nil to give new coach Eddie Jones his first win.

Scotland had several chances to get themselves back into the match; a Greig Laidlaw penalty miss was followed by an off-target Finn Russell drop goal attempt on the brink of half-time.

But it was the lack of Scotland’s precision in key zones that stopped them competing for the win. Twice in the first half and once at the start of the second, Vern Cotter’s men were closing to scoring. But careless handling errors which have typified a team on the fringes of success prevented them breaching an almost impenetrable English defensive line.

England on the other hand were clinical in attack and took both their scoring opportunities. Wingers Jack Nowell and Anthony Watson caused a myriad of issues for the Scots and the former crossed in the second half to effectively bury the game with a superb score.

But it was the pack, led from behind by Man of the Match Billy Vunipola that provided the platform for England’s control of the match; the set-piece being the source of innumerable penalties to further dent Scotland’s already diminishing morale.

The hosts had a chance late in the game but weren’t able to take it, leading coach Vern Cotter to state that they were a lot better than the final result suggests.

“They’re very disappointed players,” he said post match. “We created opportunities, we didn’t finish them off. But there’s a lot more to come from the team I think.

“They are disappointed with the way they let those opportunities pass by through lost balls and bits and pieces, but they’ll be quickly identified and we’ll put the frustrations behind us.

“We can’t do much about this one but we’ll certainly look to the next one. We can do better than that, we know we can. That game was there to be won.”

England Coach Jones meanwhile was at his entertaining best in the post-match press conference, claiming not only that he was convinced of victory during the week, but that his side could have scored more tries if they wanted to.

“There’s no bonus point in the 6 Nations. If there was, then we would have gone for four tries,” mused Jones. “But look, Calcutta Cup, two tries to nil and an easy win with no injuries. I think it’s been a pretty good week!

“I’ve no doubt in my mind that Billy [Vunipola] can be the best Number 8 in the world. I’ve read all the articles saying he’s too slow to play 8, but that was a pretty good game for a slow Number 8.”

England play Italy, who almost upset France, next Sunday in Rome as they look to continue their return to form following a disappointing World Cup, while Scotland face the daunting task of beating Wales in Cardiff for the first time since 2002 on Saturday.