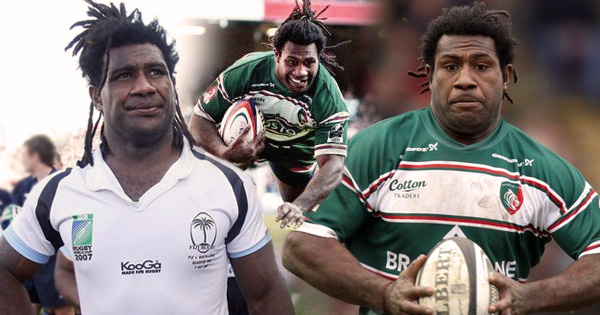 Seru Rabeni’s passing shocked the rugby world today. The former Fijian powerhouse was just 37-years-old. He died this morning in his home in Nakasi, with the cause of death speculated to have been a heart attack, while other sources said he was ill for some time.

Rabeni made his debut for Fiji 7s  at the Dubai 7s in 1998, before earning a total of 30 caps for the senior Test team, including appearances at both the 2003 and 2007 Rugby World Cups.

When the Pacific Islanders were in action, Rabeni made 9 appearances, while also playing club rugby for the likes of the Otago Highlanders in New Zealand, La Rochelle in France, and Leicester Tigers and Leeds in England. He also played at the 2002 Commonwealth Games.

Built like a forward, Rabeni was one of the hardest tackling players of his era, as well as being a great stepper and midfield powerhouse in general.

Leicester will hold a minute’s applause in Sunday’s Aviva Premiership match against Saracens at Welford Road for their former star, who scored 18 tries in 63 club appearances.

Saddened to hear of the passing of Seru Rabeni today, our thoughts are with your family. #Highlander92 pic.twitter.com/iou9hONsrS

Stunned! RIP Seru Rabeni. Absolutely hated every minute playing against you constantly smashing and stepping me. One of the Pacific Greats ????

RIP in my friend. We had some fun in the midfield for the #barbarians. You’ll be missed. Love you uso #rabeni

We are shocked and saddened to hear of the passing of Seru Rabeni. Our thoughts go to all his friends and family pic.twitter.com/QN07b4bgUO

Absolutely gutted to hear about my mate Seru. Thoughts are with his family in Fiji.

Seru Rabeni’s passing is incredibly sad. What a player and a team man. Our support and best wishes go to his family.