Graphic: The Most Popular Rugby Boots in the 2016 Six Nations 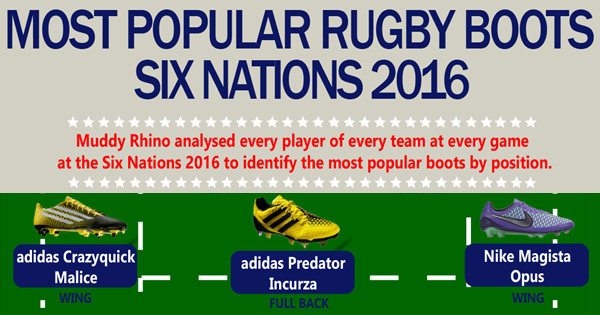 Following a research study conducted by rugby marketing consultancy Muddy Rhino, we now know that the most popular model of rugby boot worn in the 2016 Six Nations is the adidas Predator Incurza. The below graphic demonstates the most popular boots in each position.

This year adidas represented 55 percent of all boots worn at the Six Nations 2016. Compared to Muddy Rhino’s 2015 research, adidas’ domination is down by two percentage points. Asics appear to be the biggest winners of the challenger brands in 2016.

As the brand that markets themselves as ‘relentlessly leading rugby’, adidas are widely accepted as being streets ahead of the chasing pack. At Rugby World Cup 2015 competitor brands targeted minnow teams to reduce adidas’ representation to 39 percent of all rugby boots worn.

Similarly, in the early rounds of the 2016 Six Nation competition adidas’ representation peaked at 57 percent. As the tournament progressed, and the wider squad players getting involved, challenger brands clearly targeted some of the fringe players. That saw adidas’ share drop as low as 50 percent.

In the short-term adidas has little to worry about with a glut of ‘the most recognisable’ names in rugby union being signed as official adidas athletes.

The 2016 tournament saw New Balance enter the rugby market with representation from Welsh wing Alex Cuthbert and Irish Centre Fergus McFadden. Meanwhile, Taulupe Faletau switched from Under Armour to adidas in round 2 to mark a major coup for the brand.

Nike’s representation saw them continue their stance as somewhat of a bit-player in rugby. They did introduce a striking ‘Crimson’ colourway for their Tiempo Legend 6 boots. Initially this model was worn by Sergio Parisse and Maxime Médard; then later among others including Grand Slam winners Danny Care, Owen Farrell and Jonathan Joseph.

adidas’ continued success appears to come from their cohesive strategy to range position-specific boots and the launch of the new Electric Pack 2 (yellow) colourway in the weeks prior to the tournament.

Although, black rugby boots made up 40 percent of the colours worn at Six Nations 2016.

However, as illustrated in the above infographic, players continue to select boots from across the range regardless of playing position.

Looking towards next season it will be interesting to see how the pack of challenger brands respond. Nike have already unveiled their Anti-Clog Traction technology to prevent studs being clogged-up by the hallowed turf. Innovations such as these hold the potential to disrupt the landscape in 2017.

Need further data from this research exercise? Get In Touch with Muddy Rhino