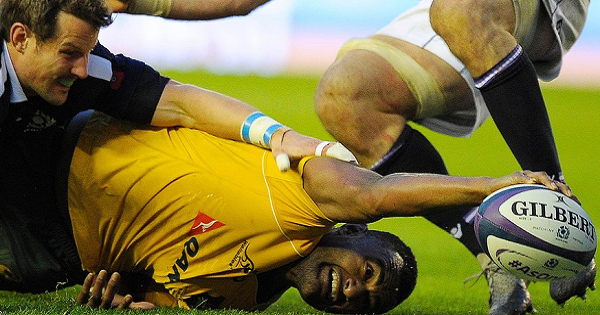 A Tevita Kuridrani try three minutes from time gave Australia a narrow 23-22 win over Scotland at BT Murrayfield on Saturday.

Scotland were dominant throughout an absorbing first half and led 17-10 at the break thanks to two tries from Huw Jones on his first home appearance.

The hosts added a third in the second half through Jonny Gray but Australia fought back with a try from Reece Hodge and three Bernard Foley penalties.

Despite losing Will Skelton to the sin-bin, Kuridrani was able to end minutes of pressure to grab the match-winning try in the final stages.

Undoubtedly the talk of the match was the performance of Jones, earning just his second cap for his country. The Stormers centre scored his first try after an inch-perfect chip ahead from Finn Russell after eight minutes and showed exceptional pace to sprint towards the line to touch down.

But if Scotland profited from a bit of Russell genius, Foley was his equal and played a key role in Reece Hodge’s superb set-piece score. The out-half wrapped around nicely with Israel Folau. What was even better was the interaction with Dane Haylett-Petty, who had come off his right wing to give a sumptuous offload to the on-rushing Hodge to set the cente free to the line.

It was nip and tuck the whole game and while Scotland will be ruing another one point defeat to the Aussies, the 23-22 result was probably a fair result given the Scots’ second half indiscipline.

Head coach Vern Cotter was pensive in defeat and spoke of a lack of luck at crucial moments: “I’m incredibly proud of the way the players played that game. There are things we can and can’t control and we’ll focus on the things we can.

“I just think we didn’t get the rub of the green at times.

“There were eight penalties against us in the second half and only two for us; there were a number of things. But that is something we can’t focus on.”