Michael Hooper cited for this dangerous cleanout on Mike Brown 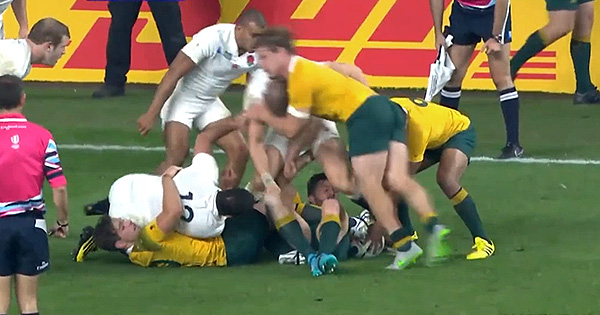 Wallaby flanker Michael Hooper has been cited following their 33-13 victory over England at Twickenham on Saturday. Hooper charged into a ruck shortly before halftime, and while referee Romain Poite and his officials felt there was no need for anything more than a penalty, he has since been cited and will face a disciplinary hearing.

Independent commissioner Steve Hinds (New Zealand) called for the illegal charge into Mike Brown to be reviewed as it allegedly infringes law 10.4 (H): charging into a ruck or maul without use of the arms or grasping the player.

The disciplinary hearing will take place on Tuesday, with Hooper facing a possible ban that could rule him out of the last pool match against Wales. The winner of that match will face the team that finishes *edit second in Pool B, either Scotland or South Africa, in the quarter finals.

As the offence usually carries a recommended punishment of two weeks at the low end of the scale, rising to 10 weeks at the top end, he could also find himself missing the quarter final.

Hooper was suspended for a week for an off the ball strike against Argentina in July.

Meanwhile England’s Sam Burgess has received a warning from the citing commissioner for a dangerous high tackle, but has not been cited. It was a high shot on Hooper himself.

Some felt that Burgess may have been lucky at the time, with Owen Farrell’s yellow card hit on Matt Giteau distracting from it.

You can view a loop of the Hooper charge above, and the full incident with audio below

UPDATE: Hooper has been banned for a week, so will miss the Wales game. Details here