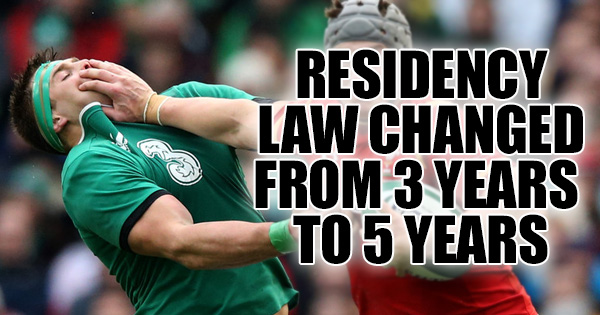 Yesterday’s Rugby World Cup Pool Draw in Japan slightly overshadowed the big news that World Rugby has changed the laws regarding players’ eligibility for other countries. The ruling changes from 3 years to 5 years, however, this only takes effect in 2020.

In recent years we have seen a huge number of players leave their country of upbringing to pick up lucrative contracts in the UK, Ireland and Europe. Those sometimes lead to playing Test rugby for those adopted nations.

A host of players have qualified to play for countries based on just three years of residency. Now, the law is set to change to 5 years, which makes what is sometimes known as ‘project players’ more of a challenging thing to put in place.

“Designed to promote and protect the integrity and sanctity of international rugby in the modern elite environment, reform of Regulation 8 follows a root-and-branch review with Council members unanimously approving the recommended increase in the required residency period to be eligible for international rugby from 36 to 60 months.”

The reformed Regulation 8 ensures that a player has a genuine, close, credible and established link with the nation of representation, and the key amendments are:

•    The 36-month residency requirement is increased to 60 months with effect from 31 December, 2020 (unanimously approved)
•    The addition of a residency criteria which permits players who have 10 years of cumulative residency to be eligible (effective May 10, 2017) (unanimously approved)
•    Unions may no longer nominate their U20s team as their next senior national representative team (effective 1 January, 2018) (majority)
•    Sevens players will only be captured for the purposes of Regulation 8 where the player has represented either of (i) the senior national representative sevens team of a union where the player has reached the age of 20 on or before the date of participation; or (ii) the national representative sevens team of a union in the Olympic Games or Rugby World Cup Sevens, having reached the age of majority on or before the date of participation in such tournament (effective 1 July, 2017) (majority)

“National team representation is the reward for devoting your career, your rugby life, to your nation and these amendments will ensure that the international arena is full of players devoted to their nation, who got there on merit,” said Agustin Pichot.

The likes of the Pacific Islanders and South Africa will surely benefit from this, as both nations have lost players overseas in recent years, with some going on to play Test rugby and even represent the British and Irish Lions.

The new initiative will come into force when the global calendar is restructured in 2020.