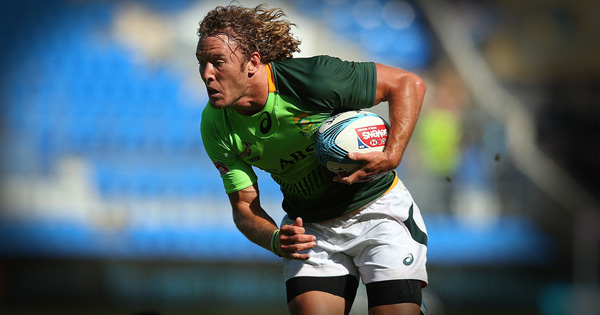 The 2016 Olympic Games kicks off on Friday, with rugby making its first appearance since 1924. We will feature different teams and players throughout the week, in the lead up to the historic 7s event, with the Women’s kicking off on Saturday the 6th, and Mens on Tuesday the 9th.

World Rugby has taken a look at some of the favourites for Olympic glory in Rio de Janeiro and our first instalment features South Africa’s rising star, Werner Kok.

At just 23 years-old, Kok certainly has a great Sevens career ahead of him.

The Nelspruit-born represented the Pumas in the Premier Division of the Curries Cup while still at high school. He soon graduated to the South African Sevens squad in 2013 – making his debut in the London leg that year – before going on to take Commonwealth Gold in Glasgow the following year.

Noted for his pace and power, Kok has developed into an essential part of the Blitzbokke. He was named World Rugby Sevens Player of the Year in 2015, an award which was certainly endorsed by his national captain Kyle Brown.

Not content with just one gold medal, Kok is dreaming of adding Olympic success to his Commonwealth title from two years ago. The desire for the team to bring home Olympic gold is especially high as the women’s side failed to qualify for the competition, meaning that all hopes rest with the men.

While the video was filmed some time ago, the motivation and excitement that Kok shows when talking about rugby, the World Series and the Olympics should resonate with every rugby fan out there.

The action begins with the Women’s competition on Saturday 6th, with medals awarded on the 8th. The Men’s tournament runs from the 9th to the 11th.