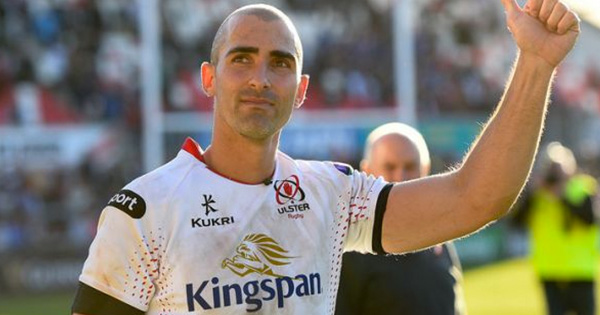 In what was his last game in an Ulster uniform, this past weekend South African Ruan Pienaar tearfully bid farewell and reflected on his time with the club and what the past seven years of rugby in Ireland has meant to his family.

Ulster were able to give Pienaar a good send off, beating Leinster 17-13. They first got on the board with a try from Roger Wilson, who himself was also playing in his last match before retirement. Pienaar then managed to get an assist to captain Andrew Trimble for Ulster’s second-half try.

For Pienaar, it was a bittersweet moment as he and his family have established themselves in the community and very much wanted to remain with the club. However, the IRFU have taken the steps to end his career in Ireland once his contract expires.

No doubt, this type of situation could be argued as one of the harsher sides of professional sport. Form fades, contracts expire without renewal, or players get traded for the benefit of a club. The result has a lasting impact on player and family alike.

Speaking on Against the Head, former Ireland head coach Eddie O’Sullivan spoke highly of the Springbok halfback but also understood the reasoning of the IRFU, saying: “It’s a tough one… There’s lots of reasons why he has to go… They’re not very emotional.”

It’s been an emotional roller-coaster for both Pienaar and Ulster to be sure.

Some of Pienaar’s Ulster teammates on the other hand, have expressed confusion as to why he must go. “As players, we’re annoyed. We dont understand the decision, to be honest. I suppose we can’t air our frustrations too much against our employers but I can totally understand the supporters’ feelings”, said Ulster centre Luke Marshall.

He also spoke about the impact Pienaar has had on the team, in particular on fly half Paddy Jackson. “You look at how the young guys came on with him. It’s hard to ignore that Paddy Jackson, playing by Ruan’s side, is now a world class out-half.”

However, things weren’t all bad for Pienaar, as he was awarded the Heineken Personality of the Year and the Ulster Rugby Supporters Club Player of the Year at Ulster Rugby’s annual awards dinner.

He also took home the award for Try of the Season at the Guinness PRO12 awards, as voted on by the readers of Independent.ie.

Hopefully, this classy individual will be able to continue his good work in France as he and his family must now look to turn the page on their impactful time in Ulster.

Guinness PRO12 Try of the Season: