RUGBYDUMP WEEKLY: Are Gloucester getting back on track? 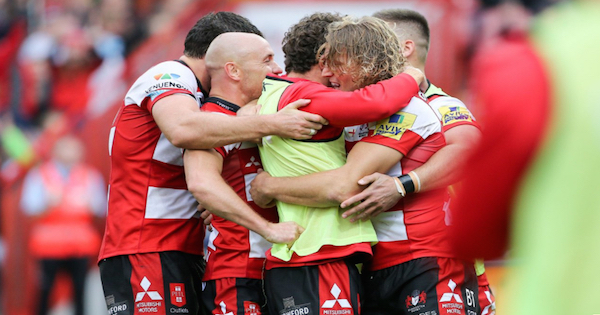 Rugbydump Weekly is a new series of features written by former England Rugby reporter and performance analyst Shay Waterworth. This week he looks at the see-sawing form and internal structure of Gloucester rugby club.

Gloucester knocked Northampton off the top of the premiership on Saturday with a 29-24 win at Kingsholm Stadium, but is this a turning point for the west country side or just an anomaly?

The result on Saturday was Gloucester’s third home win of the season, but they are yet to win an away match and suffered a record 57-10 loss against Sale Sharks in round five.

Although Gloucester are currently on a 50% win ratio, they could end up 10th in the Premiership by November if the trend continues.

The recent departure of Laurie Fisher and Jonny May could be contributing factors to their poor away form, but this is no new trend. Last season Gloucester beat two teams away from home and three in the two seasons proceeding that.

“Gloucester have got issues from top to bottom,” said former Gloucester and Scotland second row Jim Hamilton on the RugbyPod podcast. “We’re talking about a build-up of issues over several years.

“Gloucester has household names and has done for years, but it isn’t working for them. The amount of coaching changes too, Laurie Fisher recently left and then they brought in Johan Ackermann to join David Humphreys, but who’s running the show? There’s no sustainability for the coaches.

“I would let the high profile, big earners’ contracts run and get rid of them. I would manage the expectations of the club and say that they aren’t a top six club.”

World Cup winner and former All Black prop John Afoa joined the cherry and whites in 2013 to become the third highest paid player in Europe at the time.

According to former England fly half Andy Goode, Gloucester’s squad expenditure is in the top four in the Premiership and Hamilton says Humphries is the second highest paid director of rugby in the league.

Hamilton added: “Gloucester have got an unbelieveable demographic of good rugby players. Hartpury College train on the same facilities as Gloucester and I’d be looking to bring in more guys from there.

“Where’s the leadership, where are the guys with proper experience? I’d have Tom Savage as captain, he’s a guy that plays week in, week out.”

Home advantage is often influenced by the supporters and Kingsholm is widely understood to have one of the best atmospheres in the Premiership.

Next level support from you guys yesterday! Thank you for sticking with us! ???????? pic.twitter.com/xg0hG8lfuD

Hamilton, who retired last season at Saracens, said: “At Gloucester, even when I was there, the media and fans always talk about the crowd (at Kingsholm).

“They’re great, when they’re on form they’re like a French crowd, they give you that adrenaline and they back the team. But what I found at Saracens, which has a small fan base, is that when the crowd aren’t there, where do the players get their energy from?

“If I could go back to when I played and captained at Gloucester I would think differently. You can’t used the crowd to motivate you. It’s an external factor for the team so yes the Gloucester crowd are great, but stop using it as a motivation.

“You have to use each other, look around at your teammates and motivate each other by doing good things,” Hamilton said.

International players Greig Laidlaw, James Hook, Matt Kvesic and Jonny May all left Gloucester over the summer, but second row Ed Slater joined the squad from Leicester Tigers and he expressed his beliefs that Gloucester are on the right track.

“They’re definitely going through a rebuilding phase,” said Slater. “Obviously Laurie left the club and they went out to find the best coach they could and they came up with Johan Ackermann, who I think is a great coach with a big pedigree.

“Over the summer they made some big signings and when you look at it on paper, it is actually a very strong squad.”

Whether or not Gloucester are back on track to push further up the Premiership table and play top flight European rugby, one thing is for certain, the focus remains on their away form.