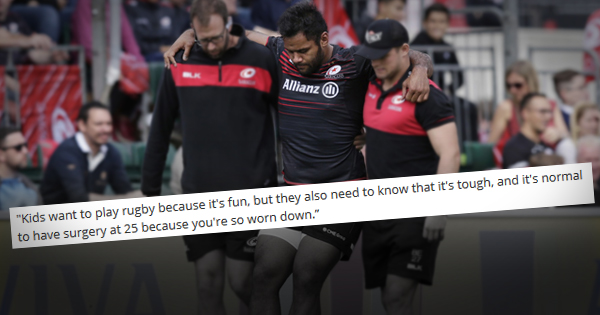 Rugbydump Weekly is a new series of features written by former England Rugby reporter and performance analyst Shay Waterworth. This week he looks at the latest injury setback to Billy Vunipola and its possible implications.

England and Saracens flanker Billy Vunipola has undergone surgery on his knee, ruling him out for four months. The 25-year-old will miss the Autumn internationals against Australia, Argentina and Samoa and it is unsure whether he will be fit for the Six Nations.

Harlequins back row forward, Jack Clifford has replaced Vunipola in England’s training squad in Oxford, which concludes on Tuesday.

Although it may seem like the obvious solution, this is an experimental squad selected by Eddie Jones, which includes youngster Marcus Smith and excludes regulars James Haskell, Kyle Sinckler, Jonathan Joseph and George Kruis.

So, who is likely to replace Vunipola in the England number eight position until he returns?

Wasps regular Nathan Hughes already has 10 caps and is included in the England training camp. The Fijian-born player is the likely favourite to swap in for Vunipola for his carrying ability and prior England experience.

The 21-year-old was talked about often last season but injuries and RFU ruling meant he had never been eligible for England until he joined Bath. Underhill now has his first England cap and has recreated some of his form in the Premiership, which earned his reputation when he was at Ospreys.

Although his favoured position is openside flanker, there is space for role development and transition alongside another youngster, Tom Curry. Both players are already in the England training squad, but as it stands Jack Clifford is a more experienced utility back row player, and not much older.

Although Beaumont has been included in England training camps before, he has recently represented Sale Sharks in the second row which may have damaged his chances for the Autumn.

However, if Eddie Jones thinks he is best suited for the back row, not many people in England would argue.

Although this youngster has only played a handful of games for Bath and recently represented England U20s, Jones might be attracted by his pace and raw power.

However, if he decides he wants a quick-fix solution through the Autumn, Jones may go for experience over potential. That that seems unlikely, but if he does opt for that approach, then the likes of Ben Morgan or Thomas Waldrom could be an option.

Following the news of his four months absence through injury, Vunipola has spoken out about his concerns over player welfare.

“I didn’t enjoy being on the surgery table twice in one year and that’s supposed to be deemed as normal,” he told BBC Radio 5 live’s Rugby Union Weekly podcast – prior to his latest operation.

“Kids want to play rugby because it’s fun, but they also need to know that it’s tough, and it’s normal to have surgery at 25 because you’re so worn down.”

Vunipola has already revealed his relief at not having to play for the British and Irish Lions over the Summer because of shoulder surgery.

“I’m not complaining, I just want people to understand that having surgery is not fun, and it’s not fun being injured,” he added. “It gets to a point when you are just done, and you can’t control when your knee goes out or your shoulder comes out.

“That was the weirdest feeling I’ve ever had in my life, not being able to control that and prevent it from happening. So something probably needs to change, or the players will just burn out.”

View a short excerpt below, with the full interview on the BBC