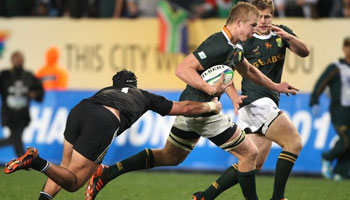 The Baby Boks beat the Baby Blacks 22-16 in front of 33 000 Newlands fans in what was arguably the best IRB Junior World Championship final since it’s inception. It’s the first time that four time champions New Zealand have lost in the final of the tournament.

South Africa used their formiddable pack to dominate up front and set the platform for the backs, and quality number ten Handre Pollard, to take the points on offer. They forced New Zealand into making uncharacteristic errors, and scored tries through Vian van der Watt and Jan Serfontein.

Serfontein was later named IRB Junior Player of the Tournament following a public vote, as well as the views of team managers, match officials and media at the tournament. He edged out Ireland number ten JJ Hanrahan, and teammate Shaun Adendorff for the hounour.

“I am humbled by the award, but must credit everyone that was on the field with me. This was a team effort from the start, where everyone just worked so hard for the guy next to him. It is a special feeling for all of us,” he said.

A huge crowd were on hand to witness the Baby Boks win, which helped immensenly according to ecstatic coach Dawie Theron, who said that from the start it was positive pressure.

“It’s unbelievable, this is the best rugby experience of my life and I played for the Springboks for 13 Tests an I must say that was very very special, but this moment words can’t describe it.

“The support from the public was unbelievable and the knowledge that Newlands was sold out was enough motivation for our players not to disappoint.

“You can see what it meant to the guys, especially after the first loss against ireland, and they carried the whole weight of the nation on their shoulders. Under pressure two things can happen, you can either scatter apart or you can gel together and become like a rock.

“We all feel blessed and humbled by this experience and with players like these; the future of South African rugby is bright,” he said.

Junior Boks skipper Wiaan Liebenberg added: “We became a family during this tournament and no one was going to drop his brother next to him. This was a dream come true for us and to be able to share this with so many South Africans was something we will always treasure.”

Below are extended highlights, and you can also View Highlights of all the playoff games