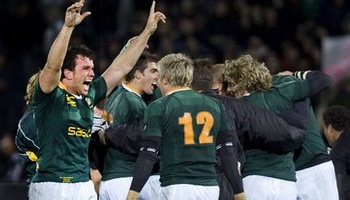 South Africa ended a 10-year wait for a win in New Zealand with a 30-28 victory over the All Blacks in their Tri-nations test on Saturday. Scrumhalf Enrico Januarie scored the winning try with four minutes remaining after the Springboks had been reduced to 14 men by captain Victor Matfield’s yellow card.

Matfield had been sent off three minutes earlier for a high tackle and New Zealand flyhalf Dan Carter kicked his sixth penalty to give the All Blacks a 28-23 lead.

However, the world champions showed tremendous willpower to fight their way back and register their first win in Dunedin at their eighth attempt and their first in New Zealand since a 13-3 triumph in Wellington in 1998.

In a fiercely contested match the Springboks snatched a 17-15 halftime lead with a 32nd-minute try by wing JP Pietersen.

The All Blacks regained the lead in the 56th minute as replacement flank Sione Lauaki stepped inside to score.

In the end, a moment of individual brilliance by Januarie settled the outcome. The gutsy scrumhalf broke from a ruck on the New Zealand 10-metre line and chipped the ball over replacement fullback Leon Macdonald, before winning the race to the ball and scoring.

Peter De Villiers, South Africa’s first black coach, had been under pressure both in New Zealand and back at home after the world champions lost 19-8 in Wellington last week.

All Blacks coach Graham Henry said the test had demonstrated the high calibre of rugby played in the Tri-nations tournament, which also features Australia.

“There are three very even sides in this competition and you couldn’t get a bigger test than this one. It was a superb game, a really enjoyable spectacle and a great showcase for the game.

South Africa now travel to Australia to play the Wallabies in Perth next Saturday.