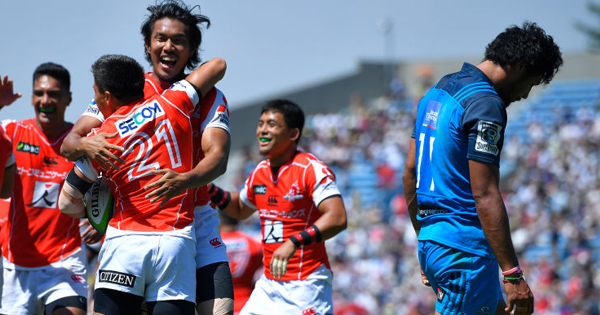 The Super Rugby Quarter Finals are now confirmed following the final round of pool play this past weekend. After 17 rounds and 135 matches, the Lions topped the log, and we now know all eight teams that will compete in the first round of knock out play.

The Crusaders’ 14 match winning streak came to an end with thier 31-22 loss to the Hurricanes, seeing them ranked second as we enter the quarter final stage.

The Conference winners and their rankings:

The four wild card teams (best runner up from South Africa Conferences 1 & 2, and three next best teams from the Australian & New Zealand Conferences) and their rankings are:

Western Force gave Matt Hodgson a victorious send-off as they thumped the Waratahs, winning 40-11 to finish second in Australia’s Conference.

The Lions finished top of the Super Rugby standings with a 27-10 victory over the Sharks at Kings Park in Durban on Saturday.

The Stormers continued their momentum before the play-offs with a 41-33 victory in a topsy-turvy encounter at Loftus Versfeld on Saturday.

The Hurricanes handed the Crusaders their first loss of the Super Rugby season when they claimed a 31-22 victory in Wellington on Saturday.

The Chiefs completed their Super Rugby regular season fixtures with an impressive 28-10 victory over the Brumbies in Hamilton on Saturday.

The Sunwolves finished their campaign on a high after claiming a shock 48-21 victory over the Blues in Tokyo.

The Cheetahs bowed out of Super Rugby with their heads held high after a 21-20 victory over the Kings at Nelson Mandela Bay Stadium in Port Elizabeth.

The Jaguares ended their Super Rugby season on a positive note on Friday as they beat the Rebels 32-29 at AAMI Park in Melbourne.

The Highlanders made a statement of intent ahead of the quarter-finals when they claimed a convincing 40-17 win over the Reds in Dunedin on Friday.