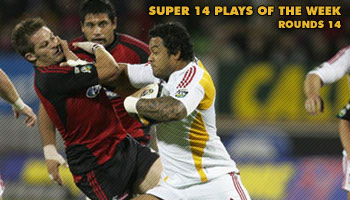 So the Super 14 is coming to an end for 2007. We’ve witnessed an amazingly close tournament this year with many highs and lows. Thankfully, more highs. The South Africans actually came to the party this year, whereas the Aussies’ invitation clearly got lost in the mail.

On the eve of the Semis the atmosphere here in Springbok land is buzzing. It’s the first time we’ve hosted a home semi final since Super Rugby’s inception, let alone two semi finals. The best part about it is that as close as it was, the top 4 teams seem to have made it through. I do tend to feel for the Cheifs though, as they had some great performances where they lost narrowly by a last minute try or conversion.

So this week’s ‘Plays of the Week’ will probably be the last for the tournament. So sit back, relax, and enjoy. But don’t forget to look out for the big man Sione Lauki’s massive handoff on the legend Richie McCaw. A true clash of the titans.