The All Blacks and Argentina battle it out in windy Wellington 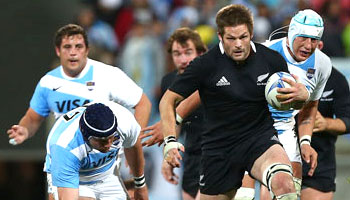 The All Blacks remain unbeaten in the inaugural Rugby Championship following a tough battle with Argentina in wet and windy Wellington on Saturday night. Los Pumas put up a spirited fight but went down 21-5 to the seasoned World Champion hosts.

New Zealand scored the first of their two tries as late as the 66th minute, after Argentina had matched them for large parts of the game, mainly through repeated turnovers and great defence.

The strong winds and driving rain affected the match somewhat, but All Blacks coach Steve Hanses said that he feels there were far too many errors regardless.

“In the first half I think we tried to play way to much rugby for the conditions,” Hansen said.

“We tried to move ball at times that we should have held on, and our ball security wasn’t that great. But part of that, too, was the intensity the Argentinians brought to the game.”

Rodrigo Roncero scored first, but three Aaron Cruden penalties kept the hosts at 9-5 up for most of the game. It wasn’t before Julian Savea and Cory Jane crossed for tries in the last quarter that the All Blacks looked totally in control of proceedings.

“They’re only going to get better and better and they’re a very good side at the moment, probably one of the best defensive teams in the world,” Hansen said.

The All Blacks host the Springboks in Dunedin next weekend, while Los Pumas travel to the Gold Coast to take on the Wallabies.

What did you think of the match, and of Argentina’s performances in the tournament so far?