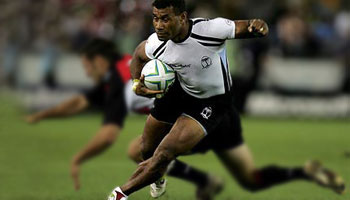 Waisale Serevi displayed some sublime skill at the recent Hong Kong Sevens tournament. He’s been doing it for years, and continues to impress.

With seconds left on the clock, the 38-year-old Serevi shows why he is rated as the best player in Sevens history by running circles around the younger Kiwis. Putting his teammates into gaps, he then receives the ball again and scores the winning try.

Tomasi Cama junior can’t take it and dives on him very late. He gets a few pats on the head for his troubles. The funny thing is that his father (Tomasi Cama senior) would have played with Serevi, so there is a bit of history there, as you can tell by the way the Fijians act towards the young star.