Wallabies reclaim third in the world spot after win over Scotland 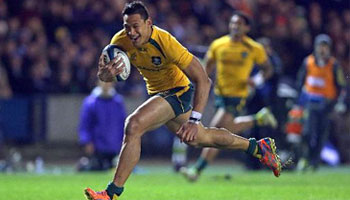 Scotland were unable to claim another Wallaby scalp at a wet Murrayfield as they lost 21-15 on Saturday. The field, suffering from a parasite infestation, broke up a lot and has since been mentioned as a possible reason for the Scots’ missed opportunities.

The Wallabies were missing a whole host of players due to injury and suspensions, but managed to score two well taken tries and hold off a determined Scotland side, who were hoping for a repeat of their famous win at the same ground in 2009.

Greig Laidlaw kicked five penalties for the hosts but they failed to cross the whitewash, and both Sean Lamont and Dave Denton have said the state of the pitch was a possible reason for that.

“Our scrum was dominant, but the pitch didn’t let us do much with that,” said Denton, referring to the pitch that is suffering from a parasitic worm infestation.

Winger Sean Lamont said that he was brought down late in the first half by Folau because he couldn’t get much traction off the surface, which will reportedly not be fixed by the time Scotland face France and England in the Six Nations next year.

“I had the angle but you can’t really step much on that pitch,” said Lamont. “It’s a nightmare. Of course the condition of the pitch makes a difference. You always want a firm footing. Unfortunately, there’s not much you can do about it.

“You can see what’s happening in the scrum. The boys felt we had a dominant scrum and were getting a good hit, but when it came to putting a drive on the carpet rips up. But it affects both teams, not just one side. It is disappointing, one of these unlucky things.”

Coach Scott Johnson was full of praise for Israel Folau, ‘a special athlete and a special player’.

“Freakish athletes like that don’t come along very much,” Johnson said. “We like to sit as coaches and take a lot of the credit for it but you can’t put in what God left out and he stood in the front of a few genetic queues.”

With the win the Wallabies have jumped back up to third on the official IRB World Rankings.

Below is a look at the two tries that the Wallabies scored. They face Wales this coming weekend.