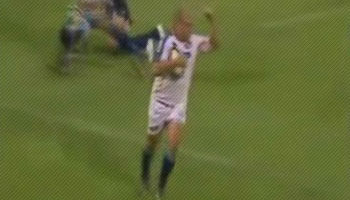 “He did it last week,it’s gonna happen again!” CJ gets the ball on the halfway line and sprints to score against the Bulls, including a ‘sidestep’ to beat the last man, who was actually Pedri Wannenburg the huge Bulls number eight.

There’s been a few great tries scored by Props over the years. Who could forget

against the All Blacks about 2 seasons ago? And then more recently,