Shortlist for IRPA Try of the Year 2012 announced 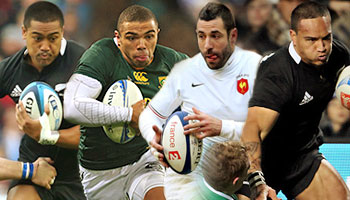 The IRB have announced their shortlist for the International Rugby Players Association (IRPA) Try of the Year award for 2012. While a lot of it is subjective, they’ve arrived at four tries, with the winner being influenced by the public vote.

Last year the winning try went to Wallaby forward Radike Samo for his great try against the All Blacks, but this year it will be a wing that wins it, as flyers dominate the shortlist.

Julian Savea and Hosea Gear of New Zealand, Bryan Habana of the South Africa, and Julien Malzieu of France have been nominated after a selection process that involved a few players who know a thing or two about scoring tries.

Try of the Year winner in 2009 Jaque Fourie, Welsh wizard Shane Williams, Japan’s try scoring machine Daisuke Ohata, and All Black Test centurion Mils Muliaina all made up the panel.

They will select the winning try, but fans can also submit their favourite via the Rugby World Cup Facebook Page. The winner will be announced in a week from now, Thursday 29 November.

The quality of the official video isn’t great but you can use the links above or the Related Posts below to get a better look at each one of the tries, and some of the previous winners.